A Story from the Basement 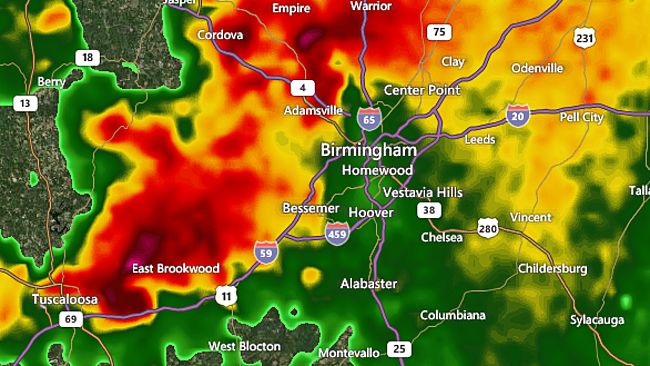 The little bit of purple by East Brookwood turned into the tornado that almost hit Samford in Homewood.

James Spann, Birmingham’s local meteorologist was predicting tornadoes and terrible thunderstorms, and so our RUF pastor, Matt, decided to stay home. Instead of hearing a sermon, we gathered together in groups and prayed – for our university, for our city, and for our world. We prayed for safety amid the incoming storm.

As arrived back at our dorm, the tornado sirens started going off. The tornado was in the northern part of the county, far away from us. We went to our rooms and anxiously watched the local news station. Then, on the radar map, we saw a menacing blob of purple and red, headed right toward our neighborhood. Along with thirty or so other girls, we grabbed our laptops and homework and headed to the basement.

Our dorm’s basement is small, and I ended up sitting next to the door. Not smart, but hey, I didn’t have a choice. Beneath my feet, I could feel the building shaking. My suitemate pulled up a radar map on her screen, and we spent the next hour watching the radar and doing homework.

The worst looked like it had passed. Then, in a shaky voice, my suitemate called out, “Uh guys? There’s a really bad storm cell headed straight toward our neighborhood.”

We all looked on our screen as the storm cell turned into a tornado. The meteorologist on the screen zoomed in on our neighborhood. The tornado was eight miles away and moving toward us.

As senior in my building told everyone to get as far away from the door as possible and to duck for cover. Our little campus was about to get slammed.

Many of my friends pulled out cell phones to call their parents, wondering if this was the last time they would ever talk to their parents. I knew better than to call my parents. They’d already be asleep and have their phones on silent. Instead, I texted my brother, praying this wouldn’t be the last time I texted him.

The tornado passed over the interstate and was now on the highway we lived off of. It was two miles away. By that point, most of the students on campus were on their knees praying.

Then, in what I would consider to be an act of God, the tornado dissipated.

And at that moment, every single person on our campus knew, without a shadow of a doubt, that prayer worked.