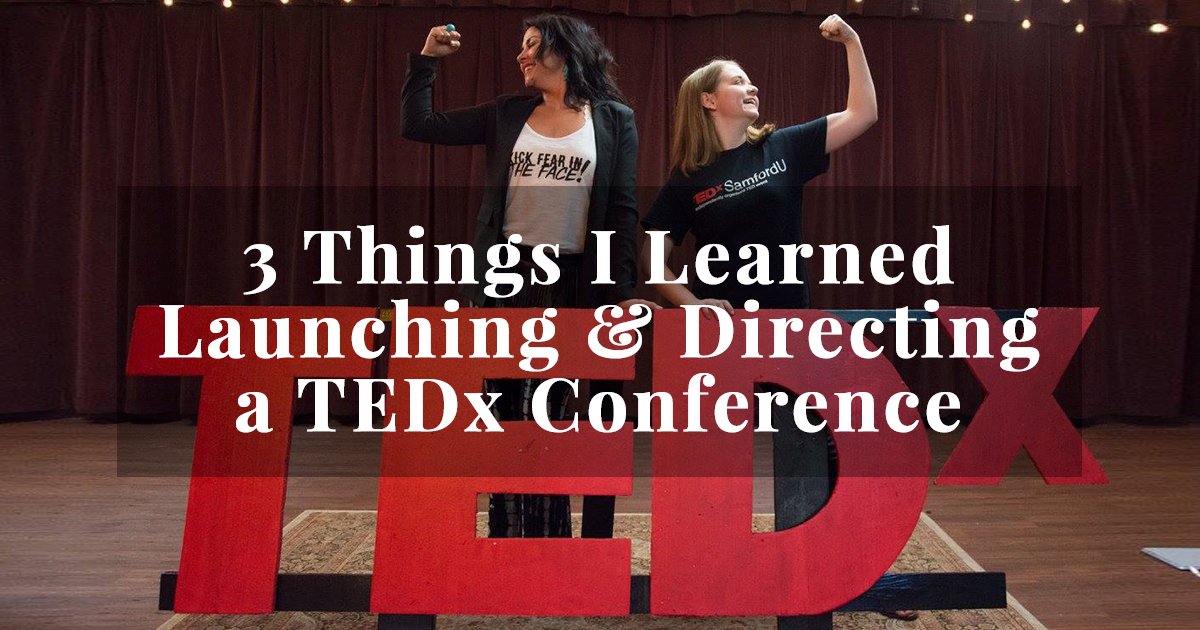 During my junior year of college I launched TEDxSamfordU, a local version of the bigger TED conference. It was the biggest learning experience that required the greatest learning curve of my life. Here’s 3 of the biggest things I learned while launching.

You don’t have to do what everyone tells you that you should do.

In everything I read online and learned in my classes, people told me that print marketing was dying. If you wanted to reach people, you had to use digital marketing – primarily social media. For our TEDx account, I created tons of content and started posting regularly, but something in my gut told me that 1) I was wasting my energy and 2) I needed to do something different. Our Twitter had gained some traction but overall, we weren’t getting the results we wanted. I also knew that students rarely make plans and they often decide what they’re doing anywhere from 1 minute to 24 hours in advance. It didn’t make sense to post on social media, when the decision people made to come to our (free) TEDx was going to be last-minute.

What did we do? We printed 3 sets of badass, branded posters to cover university bulletin boards with. The first set just said “It’s coming” with the TEDxSamfordU logo. Its sole goal was to build brand awareness. The second set had full event details and went out a month before the conference, with the final set of posters going up the week of the conference.

During the week leading up to the conference, we also put quarter-page flyers over every common area table we could find.

In the 21st century, most marketers would have asked us why the heck we were using print instead of digital. It was a good question, but we knew our target audience… and they needed print. The results? At our first conference, we had 75+ people in attendance. At our second conference a year later, we had standing room only.

Expect Plan A to work, but always have a “when everything falls apart” plan.

It was Year 1 as director of TEDxSamfordU. Our conference was the Thursday after Spring Break, and everything was ready to go… or so I thought. On the Thursday before the conference, I drove back to Alabama from North Carolina. As I was driving, I called all my speakers that I had so carefully curated to confirm that they were good to go and see if they needed anything.

That day, half of my speaker lineup told me they could no longer speak at the event.

What in the world?!?! How was I going to pull this conference off?

Here’s the deal, we have to have the expectation that our Plan A is going to work. Otherwise, we won’t be fully invested, and it will likely fail. However, at the same time, we do have to have a backup in the event that everything goes to you-know-where in a handbasket.

The good news was that I had a few people on a short list who I figured would be willing to give a talk last-minute. Over the next week, with the help of my team we filled out our speaker lineup.

Spoiler alert: the event was a success.

I’ve spent my fair share of time as the lone wolf charging at all my goals. However, I knew with TEDx, there was just way too much to do by myself. I needed to be able to offload some of the responsibility… and have a team that I could bounce ideas off of. The pursuit of success in isolation limits your potential and increases stress and disconnection. By having a team, TEDxSamfordU could go farther than it ever could if I was running it alone.

Now most teams are generally spearheaded by a leader. That was me. However, even leaders need someone outside of their team to go get advice from. They need outside support, someone who can look in, see the weaknesses & strengths, and provide objective counsel & direction as needed. I got lucky. I was able to have several leaders – both at Samford and in the Birmingham community – who could provide insight when I got stuck. Because I had a team and a few coaches, TEDxSamfordU actually got to reach its potential as an organization.

Now here’s the truth: this doesn’t just apply to business or starting up an organization. It applies to life as a whole. You’re unique. You don’t have to play by everyone else’s rules that they say you “should” live by. Be your own person! You do you. Expect life to go well for you. Trust me, it will make you significantly happier in the long-run. (Science says that too!) However, there’s a reason people have emergency funds and saving accounts. And if you want to feel really fulfilled and successful, do life with a team. Have a community of people who support and encourage you. You need people who you can turn to when you need advice or wisdom.

And perhaps most importantly, you need a coach. You need someone who can see into your world and help you gain clarity, find direction, and create intentional action to get you from where you are now to where you want to be.