If you missed my previous post, you’ll want to go read it. The Crimson, a student paper, got itself into some controversy with SGA over an article it published, though none of it was the fault of the paper.

The next day, Matt, the campus minister and a university officiall tweeted the following tweet:

The most productive way I know to express a concern is not the Crimson or Yik Yak. It’s speaking w/ courage and truthfulness to @——-sga 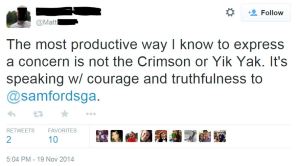 Matt just compared Crimson, a forum where articles are researched, reported, edited, and peer-reviewed, to Yik Yak. (For anyone who doesn’t know what Yik Yak is, it’s basically an anonymous version of twitter where your “feed” is generated based on your location. It’s social media garbage at its worst).

Because the Crimson staff is incredibly small, Matt was also personally attacking students on the individual level – an unacceptable behavior, especially from a university official.

I was the first to respond with @Matt—– Crimson did an INCREDIBLE job covering the issue. Please don’t hate on them. They wrote with more courage & truth than anyone.

A friend of mine, Julia, replied to both Matt and I with “Campus newspapers are also another way to share opinions and ignite change. many faculty and staff encourage it.”

Matt responded to both of us with “@julia——  @AlyHathcock I agree wholeheartedly, but I think dialogue w/ SGA may be more productive. That in no way belittles the Crimson”

Julia responded, “@Matt—– The Crimson starts dialogue and action from @——-sga. Who was it that instigated change for UA’s Panhellenic recruitment?

@ Matt—–  Zora Neale Hurston once said, “If you are silent about your pain, they’ll kill you and say you enjoyed it.”

(Matt replied with, “I never equated the two. To mention them in the same sentence is not to say they are the same.”) This is true, but obviously people are going to assume that you are equating the two – which I still believe he was on many levels.

Then, another person jumped in. Below is a record of their conversation:

John: The best way to get spiritual advice at Samford is to find spiritual leaders who don’t belittle students’ hard work or opinions

John: Comparing a social media platform to published work that goes through hours of work & peer editing is belittling. Ask any writer.

Matt: I didn’t compare the two.

John: Then why mention Crimson instead of another social media? You’re smart enough to know mentioning both equates them in ppls minds

Matt: You make a good point there. I mentioned them as 2 common venues of complaint at SU, but I should have been more nuanced.

Lesson Learned: Christianity & Intellectualism Will Always Fight
As much as I love my university, it pains me to know that Matt will likely never face any type of repercussions for his tweet that so quickly discredited a student publication and its writers. When a university official makes a big mistake – especially when it’s a “spiritual” university official at a Christian (#Baptist) university – it’s going to be swept under the rug. This entire discussion on twitter is the manifestation of “the religious” fighting with “the academics,” and oftentimes, trained ministers are uneasy with the intellectualism in the university. God and religion are some of the most intangible, theoretical concepts known to man and cannot be defined or explained. Academics don’t like not being able to explain something through ration, and God can’t be fully explained through ration. Therefore, at a university, there is a reason that the wisest choice is to have academics running a university (Christian or not) rather than ministers. Unfortunately, through mandated convocation/chapel and incidents such as these, Samford has done the opposite.

Lesson Learned: Media & Being in the Public Eye
Anyone who is in the public eye needs to be careful about what they say and do if they do not want to come across with the wrong message. Getting a message across in under 140 characters is hard. Expressing your message well in under 140 characters is even harder. That’s why journalism and mass communication students take courses in social media.

I believe it’s important when in the middle of controversy that university officials not take sides. Matt’s multiple tweets heavily implied that he was siding with SGA in the Crimson-SGA “controversy.” This would not be a huge deal if Matt was not a university official. However, Matt represents the university on a much larger scale than the average student, and he also hold much persuasion over the student body.

We need be sure that we build up the morale of student journalists. The last thing we should be doing is tearing them down. Student writers are the future of media. Do we want our media to go downhill because we didn’t support and encourage journalists when they were students?